Join the march to ROME, ITALY February 8th,2014.On December 15 in Rome, the network of  “End to a Prohibitionistic World ” has launched a national assembly, in sight of the Constitutional Court ruling scheduled for February 11 on the Fini / Giovanardi law (legislation that went into effect in Italy in 2006, named after the sponsoring ministers Gianfranco Fini and Carlo Giovanardi claiming no distinction between “soft” and “hard” drugs), in which numerous individuals, health professionals, associations and institutional partners gathered in an animated and colorful debate.

Eight years of the Fini / Giovanardi law have produced tens of thousands of arrests, the sum of thousands of years of jail sentences, overcrowded prisons, exorbitant costs to feed this judicial and repressive machine, profit growth for drug mafias, numerous victims of persecution, hypocrisy, hostages of impunity. All too many deaths to cover up– souls that are now demanding for truth and justice.

The two drug and immigration laws have resulted in a series of proceeding leading to a state of emergency in the Italian penitentiaries, comparing them to those in Turkey.

No other European country has incarcerated so many citizens for drug offenses. The heavy criminalization of consumers clashes with impunity given by the judicial system to offenders of this nature. The effects are detrimental to the health of society as a whole, as if it was created to persecute those of a preconceived descrimination. Europe, has brought attention to the situation in the prison institutions of Italy. Accused of not respecting fundamental human rights, will reside negatively before the European Union’s Council; soon to deliver well deserved sanctions!

Today, finally, things seem to be moving forward… it seems that the system can be shut down.
On January 28, 2013, the Third Court of Appeals of Rome has issued an ordinance bringing Fini / Giovanardi before the Constitutional Court for alleged unconstitutionality, which in turn has suspended the trial of two girls, arrested for possesing a few grams of cannabis. Recently across the country numerous other courts, including the Courts of Appeal, did the same, and now the Constitutional Court will discuss the issue on February 11, 2014. The main discussion will refer to how the law was enacted without being debated in parliament, but approved through a decree related to another argument (the Winter Olympics in Turin 2006) when there was no actual reason for the urgency and also the sanctions that don’t distinguish the difference between soft and hard drugs. Not only does this violate the human intelligence, but also European legislation.
We are all aware that the possibility of repeal of the Fini / Giovanardi law by the Constitutional Courts is a unique opportunity which can open up an entirely new scenario in Italy. 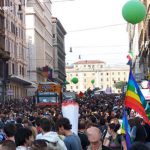 We need to bring together all the forces to mobilize individuals, groups, activists, patients, associations and organizations who have been fighting for the repeal of this infamous law to a great event that will be held in Rome on February 8, 2014 . We want to bring the attention on the damages caused by the Fini/Giovanardi law influencing  the Constitutional Court to make a sensible decision.

Please spread this appeal, to organize and mobilize people from all regions to  inform and promote fundraising initiatives in support of this event, bringing the masses to journey to Rome.

On February 8, we will be in the square because
Right or wrong it should not be a crime!