Meet the Teen Who Beat Terminal Brain Cancer with Cannabis 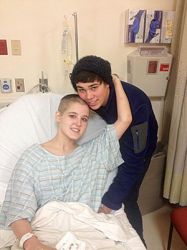 At 14 years old, Alysa Erwin was diagnosed with terminal brain cancer.  As it would with any family, the news hit hard. “When the doctor called me to tell me Alysa had cancer, she said there wasn’t a good outcome. There was no success rate whatsoever,” said Carly, Alysa’s mother.

“She told me all we could do was have hope.”

In 2014, Alysa is cancer-free, and her family believes cannabis oil saved her life. At the time, the Erwins’ outlook appeared grim. Doctors call her condition Grade III anaplastic astrocytoma, an inoperable cancer with a near-zero survival rate. Alysa’s disease, caused by uncontrolled neuron growth, had spider-webbed throughout her brain. There were no individual tumors to target. A wiry network of cancerous cells penetrated so far into her skull that surgery was impossible. That meant Alysa would have to undergo aggressive chemo—and radiation therapies, a choice which leaves many terminal patients incapacitated during their final days. In Alysa’s case, even with traditional medical treatment, doctors expected she’d survive for only another one or two years. The situation became desperate, and the Erwins sought out another choice.

Alysa’s father David, heard about Rick Simpson’s Phoenix Tears Foundation through Michigan Compassion, a medical cannabis organization. After watching the documentaries  What If Cannabis Cured Cancer? and Run from the Cure, the Erwins decided cannabis oil was their best bet for Alysa’s recovery.

“We knew what we wanted,” Carly said, “but we wanted to hear her choice.”

The Cannabis Origin: What is a Landrace Strain?