When I got given the Dairy Queen to test there were 2 very distinct phenotype`s. The 1st pheno was very cheese dominant, with a nice compact, tight bud structure, very dense hard buds, still very sticky to the touch (after a 8 week cure) and a real nice amount of trichomes which when looked at under a 100x scope were 35% amber/60%cloudy/5%clear. Phenotype 2 had a much more fluffy texture with still nice chunky buds bud not as hard and dense as pheno 1, they still had a very nice appearance and the same trichome development and color. The real difference between the 2 phenotype`s was definitely the smell!. Pheno 1 had a super strong dank cheese smell but with a slight fruit aroma!, whereas pheno 2 was totally different. It still had the cheese smell but that was overwhelmed with a amazing tropical fruit smell which we have dubbed “the pina colada” pheno! due to the coconut smell which I have never come across before in any strain I have tested! so that got me intrigued to say the least.10/10 for bag appeal super looking bud!

For testing the Dairy Queen we used mainly the plenty vaporizer, a RooR bong and in joint form. For me the best hit and fastest effect was through my trusty bong but we got the best flavor from using the vaporizer!. As you would expect from any cheese hybrid strain this was a heavy hitter right from the start. Phenotype 1 was just a total knock out cheese smoke, super fast pain relief with a very fast onset of effect,s and a few bowls before bed time did the job of knocking me out. As I suffer from amnesia this was a great relief! and the effects lasted for a good 2-3 hours. Now phenotype 2 was a totally different smoke all together!, the smoke expansion in your lungs was not as heavy as phenotype 1 but that was more than made up with the super mellow high that lasted for a good 2 hours followed by the most flavorsome smoke I have had the pleasure to test!. Both phenos had a nice fast onset of effects with pheno 1 being the more stronger knock out smoke and pheno 2 being the more mellow smoke with superior flavor.

I suffer from agoraphobia (fear of leaving the house) which can bring with it panic attacks! In my experience cheese dominant strains can set off my attacks due to there overwhelming strength!. I must have got a pheno leaning towards the c99 or romulan strains in phenotype 2! For the 1st time in 7 months after smoking the “pina colada” pheno I was able to not only leave my room but my house. It was only for a brief walk but when you dont leave the house at all a brief walk is a real great thing and I owe that to pheno 2. Now phenotype 1 was too strong for me to use as a daytime smoke so was mainly used at bedtime to knock me out asleep and to stop my mind racing which was great!, this strain had me covered from all angles!
When I first got asked to test the Dairy Queen I was a little skeptical, that was due to me growing up in the UK and knowing cheese strains very well!. Over the years many seed company’s have tried to improve or tweak the original cheese and not done a very good job!. This was not the case with the Dairy Queen and I must say that TGAGenetics have created a great strain that worked very well for my medical needs! A massive thank you to Subcool and the whole TGAgenetic team for creating a strain that finally got me out of the confines of my house. With this strain if smoked in moderation I can now leave the house on the odd occasion which to me is a great accomplishment and all that needs saying, no other strain has helped me like the Dairy Queen and for that I will be eternally grateful! and delighted I got asked to test this amazing strain! 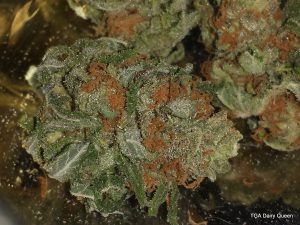 In Brazil, Some Inmates Get Therapy With Hallucinogenic Tea