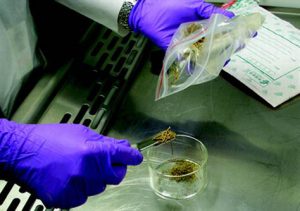 Stash for the afterlife: A photograph of a stash of cannabis found in the 2,700-year-old grave of a man in the Gobi Desert. Scientists are unsure if the marijuana was grown for more spiritual or medical purposes, but it’s evident that the man was buried with a lot of it.

Nearly two pounds of still-green plant material found in a 2,700-year-old grave in the Gobi Desert has been identified as the world’s oldest marijuana stash, according to a paper in an issue of the Journal of Experimental Botany.
A barrage of tests proves the marijuana possessed potent psychoactive properties and casts doubt on the theory that the ancients only grew the plant for hemp in order to make clothing, rope and other objects.
They apparently were getting high too.
Lead author Ethan Russo told Discovery News that the marijuana “is quite similar” to what’s grown today.
“We know from both the chemical analysis and genetics that it could produce THC (tetrahydrocannabinolic acid synthase, the main psychoactive chemical in the plant),” he explained, adding that no one could feel its effects today, due to decomposition over the millennia.
Russo served as a visiting professor at the Chinese Academy of Sciences Institute of Botany while conducting the study. He and his international team analyzed the cannabis, which was excavated at the Yanghai Tombs near Turpan, China. It was found lightly pounded in a wooden bowl in a leather basket near the head of a blue-eyed Caucasian man who died when he was about 45.