How to Yield Pounds per Plant

Each medical marijuana program across the US sets limits on the numbers of plants that patients and caretakers are allowed to grow at a time. However, with these limitations in place and using conventional growing techniques, it can be difficult to produce enough medicine to satisfy your needs. Here in Oregon, it has been reported that as many as half of the state’s almost 40,000 cardholding patients have trouble consistently getting the medicine they are entitled to for pain relief.

To overcome these limitations, a secret society of master growers throughout the mountains and valleys of the West Coast have developed advanced growing techniques and equipment in their basements, garages, bedrooms, and attics. The results of these efforts have to be seen to be believed. While most growers are content with a yield of 2 to 4 ounces, these West Coast Masters consistently yield well over a pound per plant indoors, all while staying within the limits of their respective medical marijuana programs.

To achieve massive yields from individual plants, West Coast Masters realized that they needed to totally rethink their growing strategy. They even studied disciplines such as bonsai to work out the best way to develop dense, oversized, symmetrical canopies, and custom-built their own equipment as they outgrew what was available on the market.

I am one of these masters, and I have revealed our never-before-published growing secrets in my  book The Secrets of the West Coast Masters: Uncover the Ultimate Techniques for Growing Medical Marijuana. From setting up your grow room to drying and curing your medicine, I leave no leaf unturned in showing you the ways of the Masters.

To give you a taste of what the book holds, here is a selection of five secrets that we are using to train our plants into monsters capable of yielding pounds of medical-grade marijuana.
Secret #1: Topping
Topping is the process of removing the top node of a plant or the last node of any branch. This is done in order to stop the vertical growth of the stalk or of each individual branch that forms the plant’s canopy. Topping promotes accelerated growth within the plant’s lower branches, and it also causes the branches directly below the cut to extend outward, replacing one flowering top with two. West Coast Masters top the plant above the sixth branch, then remove the bottom two branches so they are left with four main branches growing from a short stalk. These main branches will grow out in separate directions, forming the structural basis of the plant, and sub-branches will grow out of them, later filling out the interior of the canopy.

Topping is accompanied by the training techniques of bending, tying, and pruning to produce a large symmetric plant with a level canopy that will fill up a 4’by 4’ area. 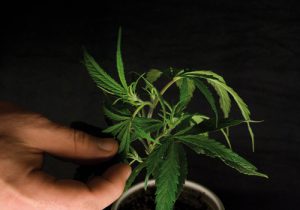 Bending is used to level the plant’s canopy. Plants send the most growth hormone to the tips of their branches that are elevated highest, as these branches have the best chance of being pollinated. Plants can identify these branches because of their sensitivity to gravity.

Whichever branch is highest will continue to be dominant if it is not controlled. Once the plant reaches the reproductive stage, this dominant branch will really take over and produce the largest bud. You can see examples of this when you look at the typical picture of a plant with one big center cola bud and several smaller buds below it on its sub or secondary branches. This produces great bud porn for magazines, but will not yield anywhere near as much as using the West Coast Masters techniques.
Instead, we aim to produce these big buds on each of the 64 tops of our plants. All killer and no filler. This is achieved by maintaining a level canopy, using the techniques of bending and tying the branches.

In ideal conditions, marijuana plants can grow between 1½ and 2 inches per day, which means that every day there will be new branches popping up trying to become the dominant one. This will not be tolerated. You have to step in and pull them back in their place with the rest of the branches. This is done by bending at first and tying if you run into a real rebel.

Bending branches is simple. You just gently bend them over so their tops are below the level of the canopy. This will give the other branches a chance to catch up. The branch that was bent down will return back to normal in the time it takes the others to grow up to it and will continue to grow along at the same rate.

The West Coast Masters believe that bending is a much more effective training method than the antiquated super cropping methods that involve breaking and stressing out your plants. Once branches are bent, they can be quickly unbent. The same is not true for broken branches.

Tying is used when you are manipulating the shape or structure of the plant. You may need to do this to fill an empty space in the canopy, or to permanently lower or raise a branch. Tying can also be used in an effort to assist the bending process, as some branches can be so vigorous that bending alone will not hold them down long enough for the other branches to catch up. However, unlike structural ties, these will need to be removed once the others have caught up.

The best material to use for tying down the plant is 12-gauge green insulated ground wire, which can be purchased at any hardware or home-improvement store. Reusable ground wire works well because it is sturdy and flexible and can be easily attached to your pot or training rail. It can be formed into all kinds of shapes to be used in the most intricate of applications. The fact that it is insulated is also important because it won’t rust and cause infections to the plant.

When tying, it is important not to wrap the wire too closely around a branch, because as the branch grows, it widens. If the wire is wound too closely around the branch, it will begin to impede the growth, and the branch will be forced to grow within the limitations of the wire, severely weakening the plant. It is comparable to putting a balloon halfway through a key ring and then trying to inflate it. 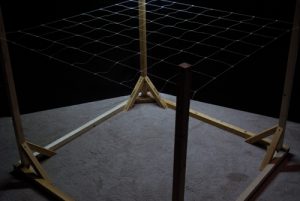 A SCROG is a structure that suspends a net over budding plants. It is used to train the plant and offer support to the branches once they have developed their heavy buds. S.C.R.O.G stands for SCReen Of Green, which is a play on Sea of Green, commonly used to refer to a small area filled with a large (often illegal) number of marijuana plants.

The term SCROG has been used for several years now, but is generally associated with growing large numbers of plants in makeshift hydro systems that offer no structural support for the plants. Though these systems are far inferior to what West Coast Masters are using, we have to give credit where credit is due, as they did offer a bit of inspiration when we were designing ours.

It is safe to say that currently less than five percent of marijuana growers in the world understand and use SCROGs in the same manner that West Coast Masters do. It is one of our best-kept secrets. We use individual 4’ by 4’ SCROG units for each plant. They are multipurpose tools that are vital for producing the best possible yields from your plants and are the basis for the shape we train the plants to take. They add additional support for each of the branches, encouraging the growth of larger and heavier buds. They also make it possible to distribute all of the branches into a place where they maintain a level canopy with one another in order to receive ample amounts of light. 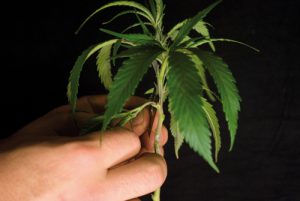 While you are training your plants, you should be doing a lot of pruning and thinning. This is because you need to quickly remove all the unnecessary little branches that appear before they steal energy and nutrients from the more important parts of your plant. Once your plant goes into the budding stage, you don’t want anything but fan leaves growing below the tops that you have developed.

When you add your SCROG, all of the extra growth below the net, aside from fan leaves, must be removed. This extra growth is removed because it takes energy and nutrients away from the tops. Because it is below the SCROG line, it will not receive any light and will therefore never fully develop. It is better to let that growth happen with your big buds instead.

Always do your pruning with a sharp, clean pair of garden scissors or a new razor blade. Make all your cuts as close to the branch as possible, not allowing any portion of what was cut to remain intact, as this could cause an infection in the plant and/or attract pests.

To learn exactly how the West Coast Masters put these techniques and more into practice to deliver massive yields, you need to get your hands on the hottest grow book ,The Secrets of the West Coast Masters: Uncover the Ultimate Techniques for Growing Medical Marijuana. Order your copy today at westcoastmasters.com

What is in a name? The viewpoint of a recreational Cannabis Seed Company