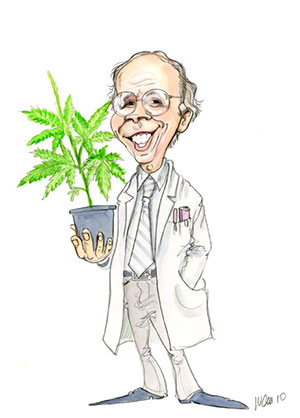 Last week the grange hall was packed for a lecture by Dr. Ethan Russo. The standing-room-only crowd was silent as Russo, a neurologist, flipped through a PowerPoint presentation packed with charts, graphs and molecular diagrams, and easily rattled off scientific terms. Only the occasional mention of cannabis or picture of a leafy green plant revealed to the untrained listener that Russo’s lecture was all about marijuana.

The talk, which drew people from Seattle and around the region, was a coming out of sorts for Russo. For several years, the 63-year-old has worked quietly out of his Vashon home, directing and publishing studies as one of the country’s leading medical marijuana researchers. He’s rarely spoken publicly about his work, and then only at medical conferences in far-flung locales.

That is until recently, when Russo left the large pharmaceutical company he worked for, removing what he called his velvet handcuffs, and the legalization of recreational marijuana in Washington created a friendlier climate to stand up and talk about pot.

Russo’s lecture at a meeting of the Vashon Island Marijuana Entrepreneurs Alliance (VIMEA) was one of his first appearances in front of the general public.

“I’ve been laboring in obscurity, and all of a sudden things have exploded in terms of interest,” he said.

Indeed, while public talks on marijuana are new for many, cannabis has made a career for Russo, who has been studying the plant and its medicinal benefits for nearly 20 years. In 2002, a writer for the magazine Cannabis Culture called Russo a “pot pioneer.”

The science behind Sanjay Gupta’s WEED 3