Is medical marijuana the answer to America’s prescription painkiller epidemic?

Photo: Medical marijuana is available in about half the country. (David Paul Morris/Bloomberg)

A new study suggests that medical marijuana could provide some relief from the national epidemic of prescription painkiller overdoses, which kills more Americans each year than car crashes do.

States with medical marijuana laws on the books saw 24.8 percent fewer deaths from painkiller overdoses compared to states that didn’t have such laws, according to the study published in JAMA Internal Medicine. That meant 1,729 fewer deaths than expected in 2010 alone, and states saw their overdose rates generally improve each year after their medical marijuana laws were passed, researchers found. 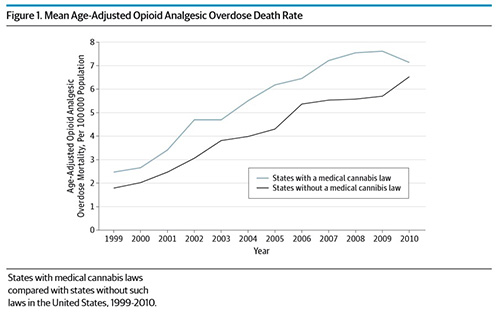 Almost half of the states in the country now have laws allowing access to medical marijuana, with pain management as the primary reason for use. The study looked at the 10 states that implemented laws between 1999 and 2010 and the three states with earlier laws. Nine more states have passed laws since the end of the study period, according to the researchers.

The study isn’t exactly a slam dunk for medical marijuana advocates, though. The authors say they can’t make a direct causal link between state medical marijuana laws and lower painkiller overdose rates. There are other limitations to the study — for instance, researchers couldn’t adjust for factors like socioeconomic status, race and patient diagnoses.

Life In Prison For Pot And Other Travesties Of Marijuana Prohibition