The next series of 3 articles attempts to explain how a name of a cannabis strain has evolved from the point of view of a recreational seed company (competitive situation), an impartial laboratory (data based inferences), and a science based seed company (collaboration with many companies based on verifiable testing).

I attended a grammar school in England where the role was taken every day. Three different students, each named John Smith, had to say “present.” They were unrelated; of different height, size, and hair colour; and came from different regions of the UK. There was no similarity other than their common name. These are people, not plants, but what occurs in the animal world is likely to occur in the plant kingdom to some extent. 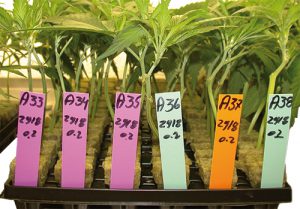 I furthered my studies into University and beyond and became interested in plant biology, studying it with increasing intensity. I found botanical names to be a complicated means of identifying small differences in families of plants and discovered that limited emphasis should be accorded a name. Common names and botanical names only partially identify plants; consequently, there was a need for several other controls to be placed on a plant to fully identify it.

As owner/breeder of Mr Nice Seedbank, an old school, selective breeding cannabis seed company, my strains have withstood the test of time: people have liked, enjoyed, and found what they were seeking. The products of this company were based on personal selections I made during the breeding processes and subsequent progeny and then plant selections made thereafter. As a result of travelling the world, collecting seed varieties, and learning from the great people who pursued these aims before me, my selections came to life. All of my Mr Nice strains are able to be replicated because over the past 25 years, I repeatedly continued to use the same breeding parents to make the progeny F1 hybrid seeds. All my strains are produced with a mother plant and a separate father plant by keeping alive clones of the selected parents in a mother room: they have identical genetics and genotype of progeny seed. Obviously, environmental influences are significant factors, and the consequent phenotypes will vary.

Other individuals have been growing my seeds for several years. There are many selections of my named strains , such as Critical Mass, Super Silver Haze and Widow that originate from Mr Nice Seed bank strains, but they could well have differed from their parents and simply adopted the parent name as a result of being selected from a seed of the original strain. Naturally, there will be similarities and, depending on the selection made, a particular plant could be closer to either the father or mother. The Botanical Association has a series of controls for a plant to satisfy to be classified as a seed strain. As a result of the global discrepancies within cannabis laws, these regulations have not yet been applied to recreational cannabis seed companies.

Some cannabis seed companies display the THC, CBD, and other cannabinoid levels on the packets of the strains they sell. Most of these cannabinoid ratings are based purely on the parent plants, rather than the seed itself. This is often a mere marketing ploy and misleading to growers and users. It’s a pity that recreational seed companies do not simply explain that the seed they are selling is their own version of parent plants they inherited, acquired, or otherwise selected. This would easily and honestly account for many of the significant variances within strains of the same name even from the same seed company.

It would clearly be advantageous if breeders tested both cannabinoid and terpene profiles on all parent plants and published them as standards for those who intended to use those strains as origins in their own breeding projects. Historical references are undoubtedly important, but until they are regulated independently, one can expect only unpredictable variation.

My recreational cannabis seed company and all my Mr Nice Seedbank strains are personal interpretations and creations of hybrids. Prior to 1998, all I and other seed company personnel had were our noses, palates, and appreciation of effects. Characteristics such as yield, strength, compactness of flower, and aroma were combined to reach a fruitful product.

One man`s treasure may not be of value to another, but given the myriad permutations and combinations available from the genes of the parents, there are more than enough to determine a suitable personal favourite. That’s why growers came to seed companies and still do, as many of them are reliable, consistent and honest. In recreational seed companies, however, it is still the case there are no regulations, and it takes many growers and discussions and much time to accurately rate a strain. Accordingly, recreational seed companies can pull the wool over the eyes of the grower, so only very limited reliance can be put on a common name of a cannabis strain.