Research suggests that plants grown organically in mediums of soil or compost produce cleaner, healthier and more beneficial crops than those grown in non-organic mediums using chemical nutrients. In this article, we shall first consider the ways that soil and compost are formed, and then later discuss some of the ethics behind using compost and composting at home.

Following the initial revolution in hydroponic methods of cultivation during the 1990s, the horticultural industry has since backtracked slightly and a renaissance in methods of organic cultivation using soil and compost (and hydroponic) mediums has re-grown. With more understanding about soil and compost mediums now available than ever before, it is hoped that this report will cover some of the basic principles behind organic gardening.

The medicinal value in using specific soils over specific cannabis varieties is still relatively unknown. As the botanical relationship between specific soil types and specific cannabinoids slowly unfolds, the medicinal community will start to benefit from the research that Med Growers, Caregivers and Breeders are currently undertaking in this field.

Soil is the loose earth in which plants grow. The ecology of soil is usually made up of living organisms, dead organic matter and mineral deposits. Over millions of years, the remains of plants, rocks and animals have been composted down to form the dark textured sub-terrestrial substance we call “soil.”

Depending on the geological and geographical origin, the local environment and former habitat, the different soils have evolved speci 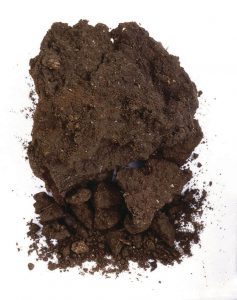 fically in different regions. All soils sit upon a foundation of natural bedrock. This underlying bedrock ultimately lends character to the nature and pH of the soil living above it. As the elements of rain, frost, and wind weather away at the landscape, particles of sand and minerals are gradually added to the surrounding soil. Geological events in pre-history have since shifted large areas of soil from one place to another in a process known as “deposition.”

Traditionally soil sites are measured in content of sand, silt and clay by Horticulturalists. However, Geologists may use the same words when applying a slightly different meaning.

soils are free-draining and require added organic materials and a regular source of nutrients to keep them healthy and in good condition. 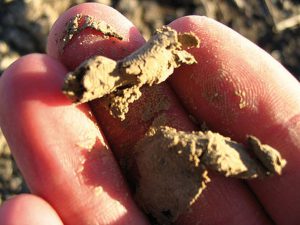 Silt soils are associated with wetland areas, recently drained sites, and the bottom of old lakes and rivers. Silt sits between sand and clay in terms of particle size and occurs as a result of chemical processes and weathering. Silt is made up of fine minerals — so fine they are first carried on the surface of water before being deposited as a sediment silt layer. Silt soils usually contain some broken down organic matter and available minerals combined. The hydromorphic properties of silt, however, mean that only aquatic plants can be fully adapted to the wet growing conditions that silt soils provide. Silt soils therefore require lots of work, added organic matter, and gravel/perlite to get them into shape ready for cannabis cultivation.

Clay soils are the remains of secondary sedimentary depositions of minerals and organic matter. Clay soils were deposited on l 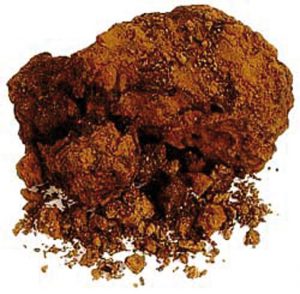 and from their original location at the bottom of ancient lakes and sea beds during glacial shifts. Clay particles represent the smallest particles on the soil chart. While clay soils display plasticity when mixed with water, they soon become brittle when dry and require careful management. Clay soils may also ‘smear’ when worked with heavy machinery. The negatively charged surfaces of clay particles, however, contain positively charged plant foods. When “freed-up,” clay soils then provide high levels of available nutrients. Clay soils require lots of added organic matter to help improve soil structure and overall condition.

Soil is viewed by Soil Scientists as a living organism. Natural soils play host to and provide home for literally thousands of individual species of organisms. These may include Micro-fauna like bacteria, fungi, protozoa, roundworms and yeasts ; Meso-fauna including lice, mites, springtails and tardigrade; Macro-fauna including ants, bees, beetles, centipedes, earthworms, millipedes, snails, wasps and woodlice; and the Mega-fauna including frogs, mice, rats, snakes, and field voles — just to name but a few of the animals that inhabit the soil world.

Each species naturally has its own place within the overall ecology of the soil. Managing natural soils to the best of their potential, for the purpose of gardening, therefore involves striking a balance with nature. Being prepared to work closely alongside a whole host of fungi, animals, and insects is just a small part of learning what “soil-life” is all about. Getting your hands dirty is the best way to learn!

As a rough guide: sandy soils crumble easily in the hand. Silt soils feel sludgy and sticky. Clay soils will be supple and are easily rolled up into balls. To the eye, darker soils always contain more in the way of available nutrients than lighter soils (within the same region). In the extreme, Soil Scientists will happily smell, taste (eat) and then listen to the sound of the soil sample they are working with (between thumb and finger) in order to assess the soil’s texture and composure.

Compost is a composition or “composure” of organic materials manufactured for use within the horticultural industry as a substitute for soil. Compost can be made from extracted natural soils, the byproduct of forestry and from organic waste materials, and can include synthetic soil additives and chemical enhancers.

Healthy compost usually comprises of a blend of broken down plant remains and other organic substances. These materials have been “composted” together for several seasons to form a rich textured soil substitute that will provide high levels of available nutrients to plants. “Organic Compost” usually comprises of organic waste materials, manure and organic fertilizers. These have usually been carefully selected and then blended together by hand.

Non-organic compost may contain artificial soil additives and non-biological nutrients and/or have been subjected to chemicals to help accelerate the composting process. Some brands of compost are likewise tumbled by machine, which helps speed up the composting process by allowing more aerobic bacteria to generate within the compost.

Making your own compost is the most rewarding and least expensive way of providing a healthy living medium for your plants. Buying compost is, however, the ideal option for anyone who doesn’t have the time, space, energy or health to prepare their own soil-mix at home. Therefore, we will start with the shop bought compost first:

Peat-based compost is made from soils extracted from marshland and moorland habitats. Due to the hydromorphic nature of wetland soils, the peat must be dried out and processed before it is ready to be used as compost. Peat-based compost often contains additives to help improve drainage and the overall condition. These may include: fertilizers, perlite, sand, vermiculate and worm casts.  Poor quality peat-based compost may also contain slow release chemical fertilizer pellets or granules. Compost containing slow release pellets is unforgiving and should be avoided when cultivating cannabis.

Specific compost is usually ideal for cannabis cultivation because it has been specifically blended to meet the requirements of the cannabis plant and the grower. The most famous European brands that come to mind include: Atami, Bio-Bizz, Canna Professional, and Plagron. Each of these specific composts tends to produce similar results in the garden. When tested against regular shop-bought compost, the specific compost brands usually win, roots down. 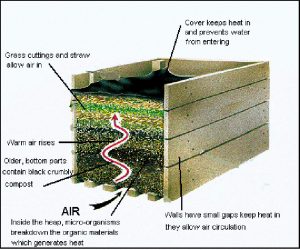 Composting is perhaps even more popular than it ever was. Making your own compost at home is cheap, easy, fun and economical, not to mention a really ecological way of renewable gardening and working with nature.

To make your own compost, you will need an outdoor space to recycle domestic waste products. This can range from a rotational bucket system, to a compost heap, all the way up to a pallet-constructed New Zealand-style compost bin. The idea is to make a warm and ideally well-ventilated space, where waste materials can break down and decompose naturally.

Domestic waste materials for composting might include: egg shells, fruit and vegetable waste, garden waste, leaf-litter, nutshells and masts, shredded newspaper, cannabis trimmings, bubble hash waste, old indoor compost, stalks, tea bags and, of course, some earthworms to help break everything down. The only rules are to never add cooked material or meat to a compost bin, and always avoid carcinogenic materials such as tobacco and fern / bracken fronds.

The secret is to layer the materials evenly and turn the compost every few weeks/months. Once a rich, healthy texture has developed, spread the fresh compost onto a sheet for a day to remove any insects (the birds will eat them). The compost is then ready to add to indoor soil mixes and outdoor soil beds.

The ecology of compost

Crazy as it may appear, the majority of specific compost brands labeled “organic” used within cannabis horticulture today are procured from non-renewable sources. The peat bogs and fenland from which peat-based compost is harvested are being depleted at a much quicker rate than the millions of years of hydromorphic soil conditions can replenish them. Likewise, the natural habitat of wetland wildlife within these areas is dramatically and permanently altered by peat-bog harvesting.

Ironically one of the few regions of natural wetland that remains untouched by tractor, trailer and soil cutting machine is the land surrounding the failed nuclear reactor at Chernobyl in the Ukraine. Here, due to a lack of recent human intervention, wetland wildlife is thriving and a healthy nature reserve now flourishes.

More recently, the horticultural industry in Europe has looked further afield than its traditional peat harvesting regions in Ireland, the UK, the Netherlands and Scandinavia. Several peat-based composts are now being sourced from the steppes of Russia and China, the ecological impact of which is currently unknown.

As container loads of compost are shipped about the planet, the cost in fuel, money and pollution ever multiplies. The risk of soil contamination and unwanted pests also ensures that compost brands labeled as “organic” are usually never organic in methods of production. That is, “organic compost” labels usually fail to mention the fact that most of the living (beneficial) organisms have already been removed via sterilization in order to have attained their “organic” certifications.

The ecology of composting

The main benefit of composting at home is ecological. The wildlife living in and surrounding compost sites usually represents its own ecology niche. Be it on a macro scale herding microscopic fauna when making organic fertilizer tea and cultivating worm-casts under a homemade worm bin, or on a Mega scale where the local hedgehogs, robins, and wrens are welcome to come in and forage for insects in the bin. The ecosystem surrounding and within the compost site stands to benefit.

Homemade compost also offers a much more practical way of introducing genuine organics into the garden. By using selective materials to make your own compost, it is possible to attract a whole plethora of beneficial microorganisms that will rapidly help generate waste materials into healthy organic matter. The natural bi-product of which is “humus,” an almost jelly-like substance, which directly enhances the soil condition and the soil’s ability to sustain healthy plant crops.

Those with time and space may consider constructing their own large-scale compost bins from old wooden pallets and wire meshing and perfect the art of composting. Combining natural outdoor soils, previously composted materials, and secondhand indoor substrates like specific compost brands and coco fiber is, arguably, one of the best ways to make your own soil mixes quickly at home. Otherwise, composting domestic and garden waste materials using traditional methods takes a few seasons to produce really healthy compost that is ready for use indoor and outdoor in the garden.