Vaporization of Cannabis: Are there benefits over combustion?

By William EckhardtAlthough vaporization is a relatively recent development for the delivery of cannabinoids the proliferation of vast numbers of devices in the market is nothing less than amazing. For the cannabis patient this is potentially a good thing but do they work? Is vaporizing better and if so how much better? What characteristics would I want in a vaporizer? 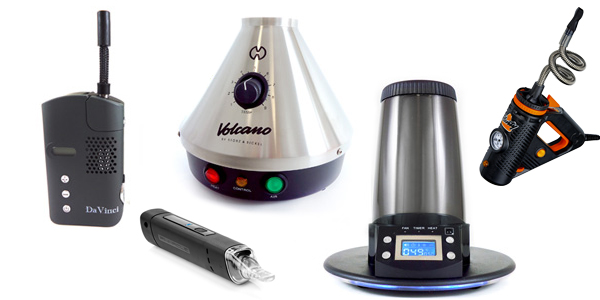 Luckily there have been studies that compare smoking cannabis to vaporizing cannabis. The Institute of Medicine created a report on cannabis as medicine in 1999. You may already know that they did find benefit in cannabis as medicine. They also found that there was a need to make this medicine safer as there are risks involved. They stated however that “except for the harms associated with smoking, the adverse effects are within the range of those tolerated for other medications”. So studies were designed to evaluate vaporization and comparing it to the combustion of cannabis during smoking.

Vaporization occurs when cannabis plant material is heated to somewhere around 180° – 200°C. Combustion occurs at 230°C or above. Toxins begin to occur at temperatures above 200°. The studies were done in hopes of finding a more medically sound way of delivering this therapeutic plant material. The method needed to be safe, reliable, and have a rapid onset. Oral methods fill the bill on the first count of safety. When we are treating nausea or vomiting with the oral method, oral tetrahydrocannabinol (THC) unfortunately fails. Oral THC is highly unreliable for onset timing and at best is quite slow. This is not what you want when treating nausea or vomiting. Vomiting also adds the confounding factor of dosing the patient who shortly after vomits. Do you dose again? Do you wait for the timing of next dose? Was some assimilated or none? Oral dosing does have one advantage and that is length of therapeutic benefit seems to be longer. Not much of a benefit as with smoking or vaporizing you can just dose again when the benefit is gone.

The most studied vaporizer seems to be the Volcano. It is an electric vaporizer that has a chamber for the plant material which was heated to about 190° in some studies. The Volcano uses a blower to make the hot air flow through the material evaporating the resin of the trichomes that grow primarily on the female flowers of the cannabis plant and contain the highest level of THC. As stated there are many different vaporizers on the market so be aware that variations in temperature, plant material, THC content, method the device uses to heat with, ability to control temperature, ability to read the temperature, and changes in power to the device will all effect outcomes. A vaporizer of good quality will have a rapid onset of therapeutic levels, direct delivery of THC to the bloodstream and thereby the blood brain barrier, and easy titration of the dosage while not delivering toxins. The delivery of cannabinoids other than THC such as cannabidiol (CBD) and cannabinol (CBN) will likely have benefit as these cannabinoids therapeutic potential is unraveled.

What did the studies find as far as components of the vapor vs. the smoke? The Volcano delivered 36-61% of the THC in the sample which is quite similar to that of smoking. The risks involved in smoking the plant material are many, but carcinogenic polynuclear aromatic hydrocarbons (PAH) are a major concern. PAHs are one of the nastier byproducts of combustion and putatively a major player in smoking related cancers. Now cannabis smoking has not been linked to causing cancer but there are increases in bronchitis and infections of the pulmonary system. The cannabinoids are not the likely culprit but rather the byproducts of combustion of the plant material1.  The output of the vaporizer is primarily cannabinoids with trace amounts of other chemicals such as caryophyllene, which is an aromatic terpene found in plants. The smoke contains five known PAHs and greater than 100 other chemical components. The studies I have seen demonstrate little in the way of measuring toxic gases other than carbon monoxide (CO). CO exhaled during vaporization is very little whereas smoking increased CO. The mean CO of -1.9p.p.m. for vaporization and a mean of 15.5p.p.m for smoking was seen in a study used differing amounts of THC in samples for patients in the study . Tars were shown to be reduced by at least 56%2. Vaporization has also shown to increase plasma concentrations of THC over smoking cannabis3.

To conclude vaporization has the medical benefits without the byproducts of pyrolysis in smoke. The devices although more expensive than pipes and papers are durable and have  other attributes that smoking does not have; such as being acceptable in places where smoking is not allowed. An attribute I find very important is a fixed temperature of about 190° or a variable temperature with a digital read out (manufacturers of vaporizers that do not have read outs but are at a fixed temperature should state in writing that the temperature at the plant material is 190° + or – 5°). I do caution a person that having the ability to turn your vaporizer above 200° is not a good idea, unless you will be using it for plant material other than cannabis that may require such. Another attribute would be the ability to mix or stir the plant material giving the vaporizer a higher efficiency in utilizing the available cannabinoids within the plant material. The user should be aware that vaporization does not eliminate stimulation of irritant receptors in our airways and therefore the patient may cough just as in smoking.

William Eckhardt is a science writer, lecturer and cannabis advocate. He can be contacted at CB1CB2TY@COMCAST.NET.